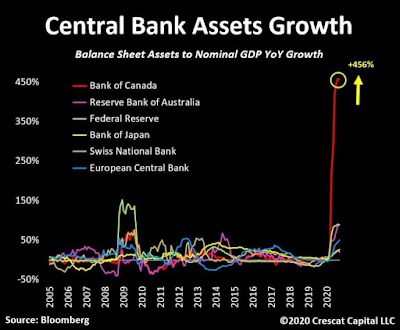 N
As a Canadian, this chart sobers me. Gross Domestic Product is how much goods and services your country produces. Yes, it includes the products which are self consumed like food. As you can see via the chart Canada has had a 456% balance sheet growth in 2020. This is equal to the increase in the price of Bitcoin over the last year.

Why have we done this to ourselves? A lot of the blame has to go to the Central Bank of Canada. They keep telling Canadians that inflation is less than 2% so borrow as much as you can. In fact the consequence of you taking on to much mortgage is not that you will lose your house, but rather that you will have to use the governments forbearance program.  Without any consequence for your bad decision people are being encourage to make more bad decisions.

The bank of Canada would like you to believe Bitcoin is not an unit of account or a means of exchange. They have given up on the idea that it is not a store of value. (Currently the Canadian dollar stands at 8th place on the Store of Value chart and Bitcoin at 12th place.) In fact, as Bitcoin  replaces the USD as the safest place to store your value they start to realize the if Bitcoin doubles its market cap more people will use Bitcoin than the Canadian dollar as money. Whether Bitcoin is used as a means of exchange or a unit of account is immaterial. The savers of society just want to hold onto money for a rainy day. Whether you have to convert your Bitcoin into dollars or just buy your Tesla via Bitcoin is immaterial. Once the Bank of Canada realizes that inflation is a lagging indicator and try to stop inflation they will realize that their tool kit boils down to one weapon and that is interest rates.