Over 5000 people have donated 1 million dollars via Bitcoin 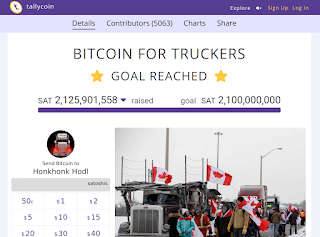 When I started helping with lighting Bitcoin I never though how quickly Bitcoin would catch on in Canada. Go Fraud me had raised over 10 million before to much political press came down. They had already dispersed 1 million dollars, but then the TD bank froze that money on their side. What are freedom loving Canadians to do where they can't send money to each other? Well, up steps Tally Coin the website was a little bit more developed than https://geyser.fund/ and it has already implemented Bitcoin lightning payments. The reason why lightning was so important was because on-chain transactions where costing 10 sats / vByte (approx 1 dollar per transaction) for the last 2 weeks.  The other important factor is lightning allows for more anonymous donations. Cheap, anonymous donations allowed over 5000 people to donate over 1 million with no fear of bank or government seizure. Like their website says:

"The Canadian Bitcoin community would like to have a second financial access point for #FreedomConvoy2022. Legacy financial infrastructure can sometimes be politicized and clamped down upon, whereas Bitcoin is a truly censorship resistant method of communicating value. Don't allow your voices to be silenced, and don't allow your financial sovereignty to be trampled upon. Love, unity and freedom - let's raise some hard money for hard workers!"

To have a sense of how amazing this is you need to realize how new lighting transactions are. Right now there are only 3500 Bitcoins on 35,000 nodes (20,000 active) so these Bitcoin banks are only risking 200 million whereas the Bitcoin network is worth over 1 trillion. 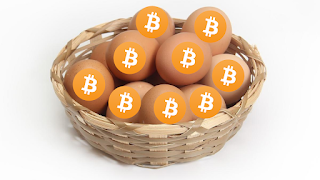 Every time I onboard a newbie into Bitcoin I wonder how their journey will be.  Will they crash and burn (sell) or be like me and try to buy the dips.  Here was my path.

I first bought #Bitcoin in blind speculation.  Then I believed in it as an investment. Then I believed in it as money. Then it became my primary money. Then I decided to build a business around it. Today I am convinced #Bitcoin is legit --  humanity’s best hope for peace & prosperity. This is because the world is in tough shape right now:  -Unworkable, socialistic economic policies; the march of tyranny; authoritarianism & state violence; inflation & a broken supply chain and job market kaos.

I onboarded this new newbie onto the Phoenix Wallet because it allows her to have self custody and do Lightning Bitcoin transactions. It was a little hard explaining the 3000 lost sats from what I sent her and the couple of lost sats when she sends it onward. I think having me there to explain the "Restore my wallet", feature by Acinq via entering the 12-words helped. She asked me about word order so I think she was catching on to how important the seed words are. She liked the instant transfer of wealth.  Having a little Bitcoin nest egg helps everyone secure their future.

Bitcoin -- Pragmatist climb on board 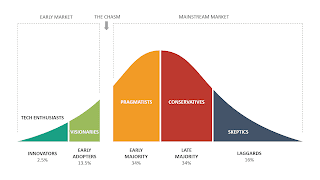 Who would of thought that it would take bitcoin 13 years until the pragmatist would catch on.  Last week I had 2 people (who are smart and rich) phone me. They wanted to talk about bitcoin. I explained how Internet 1.0 allowed information to become easily available. A lot of people, 40 and under, have heard about tor but don't understand why we need it. Then I went on to talk about Internet 2.0 where digital information is hard to duplicate. One person wanted me to talk about Ethereum, but it has more  to do with gambling than a real form of currency. People want to call Ethereum money, but it is like calling the stock market money -- if someone buys your crap then yes it is money. Ethereum has been trying to get the handle defi (decentralize finance), but it is really peer to peer finance. We are so new to crypto that not many are really educated on the subject. 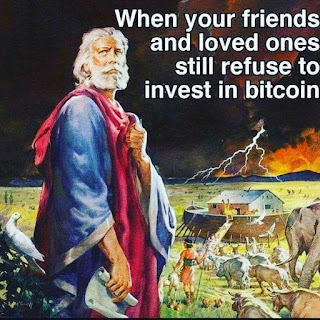 Thirteen years makes bitcoin a teenager and that is when people start testing their wings. It seems to me, like teenagers, bitcoin is forcing others around them to take action. Bitcoin is the hardest money and it’s going to destroy every other fiat money; even if Raoul Pal thinks Ethereum is better than Bitcoin. Now that Bitcoin is at a all time high most people are giving it a second look. This second look allows people to challenge their presuppositions. I do have my doubts also, however 13 years is a long time. There is a lot of metrics that calm my fears. Bitcoin is more than 10% the value of all the gold in the world. Taproot allows for multi signature wallets to look like regular wallets. The hash rate is over 140 exahash.
Posted by King Arthur No comments: