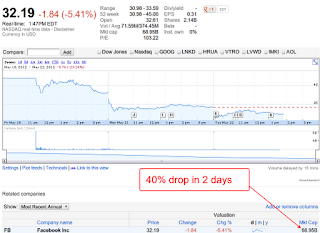 Facebook went from being worth $112 billion to $68 billion in 2 days.  Social media isn't the advertising darling of the 21century, at least not enough to part investors with their monies. With over 90% of Facebook's revenue coming from advertisement and Facebook having to imitate Google in order to keep their audience, it will be a interesting play for dominance in the Social Media space in the next few years.
When Google Plus increased the size of the pictures in the post stream, Facebook had to follow suit but this means that Facebook doesn't have as much screen space for advertising.  Facebook only gets one click with over 2000 impressions and the smaller the ad the lower the number of clicks. In my mind Facebook will be another Myspace with just the younger generation joining and posting because of narcissistic tendencies and the sharing of pictures can be done on any website. My friend Roz is already doing this through her blog and she gets to keep the advertising revenue.
Posted by King Arthur