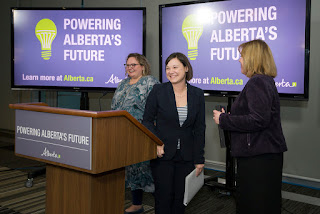 Well, today I watch my neighbour loose his transformer. He was only using it to heat a waterier for his buffalo. He was only needing 3 kWh per day for 120 days, at most 0.5 MWh per year. To get the pole and the transformer back will cost him about $10,000. So why is Atco Electric trying so hard to reduce their unused transformers that are still installed? Does installing and removal of power to the premise increase their bottom line? I guess the real question is should Atco Electric be charged more to install electric utility lines (increase their access fee), thereby making every rural Albertan go off grid. I think the breaking point is quite a bit less than 7200kWh per year (average Alberta household use). The problem with a cattle waterier is that it needs to be working on the coldest day of the year--yes those days without any sun. So it needs to have 21 kWh of storage (7 days x 3 kWh per day). That amount of energy storage would cost over $10,000. But at least energy storage is equal to grid-tied energy system from Atco. Even further down the road, the move to a 100% renewable energy that is not grid-tied will become more and more cheaper compared to Atco Electric grid-tied system. Too bad we didn't learn from Ontario's mistakes -- Companies like GM leave Canada when electricity cost are too high.

In my opinion, Atco should leave the pole and transformer in working condition and offer the land owner a FAIR rent. FAIR rent would be the wholesale price of the pole and transformer times prime rate. Eg. Transformer $1200 and pole $300 times 4% equals $60 per year. Most landowners would agree to this and we would have more electricity available to Albertans at a cheaper price, thus making electricity affordable and encouraging more businesses move to Alberta.
Posted by King Arthur No comments:

It my birthday so give me a minute of your time.

The older I get the more wisdom I have -- so you should listen to me.

For the last 100 years we have had central banks giving people the ability to exchange goods and services. If a bank trusted you then you could do more and more transactions. The next century will not be this way. More and more exchanges will happen via Bitcoin and not through centrally controlled banksters. Yes 2.2 trillion (current value of the Canadian banking industry) will be removed from the TSX and transferred in to a new asset class called crypo currencies. The current Bitcoin market cap is only 78 billion so Bitcoin needs to grown 270 times it current value just to handle the banking needs of Canadians. Ok, in the future, I don't think Canadians will be dumb enough to store 1/3 of their stock equity into banking assets.

Every time someone taxes a transaction the velocity of money slows down and society is worst off. The Bitcoin society is trying very hard to reduce transaction costs. Currently the Lighting Network is over 2 million in value. So storing some Bitcoins on that network will reduce your transaction costs to Satoshies (1/100,000,000 of a Bitcoin).

Different tax bail outs have reduced the governments ability to help out Alberta's Oil Industry so currently Alberta is stuck at selling it's oil for $14 dollars per barrel.  Alberta 100 billion deficit is nothing to the 16 trillion dollars Albertians have received for inheriting a lot of dead animals and plants. The NDP and Liberals want to improve the GDP by spending and yet getting above 3% growth in GDP, because of population growth restraints, is very hard to do.  That is way my birthday was so important for Canada. Have a great day!
Posted by King Arthur No comments: